Speech by our Prime Minister

The by Five Spices designed Dutch climate pavilion was the home base for the country’s negotiating delegation during the COP21. It was also the venue for a major series of events and presentations. The climate summit started on Monday, 30 November with Prime Minister Mark Rutte of the Netherlands as one of the speakers.

Five Spices is 10 years old – a great occasion to design a new logo and website. Our five guiding principles are still important. They are the ‘spices’ in our name and represent the following.

These five ‘spices’ ensure that we create a well-balanced end product. The combination of different disciplines such as graphic design and interactivity will make the end product striking and thought provoking.

We would not have been able to produce such good results without our clients who have brainstormed with us so enthusiastically over the past 10 years. We are very grateful to them.

Five Spices has developed a new method of working on projects that has proven successful. We call it ‘Design on the spot’. It means that we can be hired by the day and we will come and work at your office, on the spot. We do not need the telephone, email, Skype, WhatsApp or any other communications media. Instead, we have direct face-to-face contact and immediate consultation. This makes the dialogue between client and designer fast and effective, leading to the best results. Before we go on the spot we will discuss the project and mutual expectations. We use the bicycle or public transport to travel, so we even reduce our impact on the environment.

Both our clients and we ourselves have found this method of working very rewarding and we always look forward to our new temporary workplace and colleagues. Phone us on +31 (0)6 419 99 44.

At the OECD headquarters in Paris

‘Present the Netherlands as a Sustainable Urban Delta in a distinctive and creative way during the chairmanship of the OECD Ministerial Council Meeting in Paris.’ That was our assignment. We took the Netherlands’ success stories in the area of sustainable urban deltas and designed an exhibition in which these stories played a prominent part. We then worked with an enthusiastic project team that included the Ministries of Economic Affairs and Foreign Affairs to match the content and creativity. The end result was a great success for the Netherlands in Paris.

The film shows how the 2,000 panels were hung by hand.

The floating molecules of the Dutch gas world in Paris

Large, prominent floating gas molecules were a colourful addition to the Dutch pavilion. The visitors could not miss them – the five large elements, quietly hanging above their heads giving out their message with internal lighting. As the floating molecules are all light weight and – when deflated – fit in a suitcase, they can be transported easily making them highly suitable for re-use.

This pavilion was commissioned by A. Hak, EBN, Gasunie, VSL and NMi under the leadership of GasTerra for the Dutch gas world for the World Gas Conference 2015 in Paris.

‘Sustainable, economical, easy to install and typically Dutch for the Dutch Day at the Solar Decathlon in Versailles, near Paris. We need this for the embassy. Can you make it?’ asked Huub Buise, Trade and Economic Counsellor at the Dutch Embassy in Paris.

Of course we could. We turned an existing building in the park of Versailles into a creative colourful and welcoming space for students and visitors. They were all interested or directly involved in international sustainable projects. With great enthusiasm and unity, the specially designed wallpaper was carefully draped to complete the transformation of the space into a friendly Dutch atmosphere. The pavilion was finished just in time for the official opening by the Ambassador, His Excellency Mr Kronenburg. 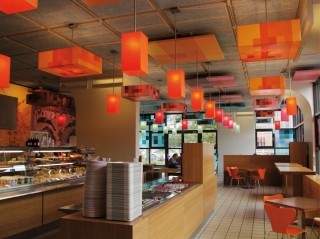 Five Spices took on this assignment for the Museon with great pleasure. After designing a number of exhibitions, we worked hard on restyling the Museon restaurant. The objective was to make it more appealing to visitors. The premise was to keep the basic style and character of the architect Quist. We added colourful elements such as lamps and graphics. As sustainability and re-use are important to the Museon, we used bamboo for the specially designed furniture and re-used the existing seating.

‘The living streets of Shanghai and The Hague’ was the title of two successful events about street photography. The events were initiated and organised by Five Spices. We joined the forces of street photographers from both Shanghai and The Hague, thus enabling creative exchange. The event in Shanghai, opened by the Consul General Peter Potman, drew plenty of visitors. The exhibition then moved to The Hague.

For the event in Shanghai, the well-known photographer Lu Yuanmin was interviewed by Sue Anne Tay, herself a popular blogger and photographer. Among the works were those of Tui and Tan Tien Yun.

A new studio in the 'Stadhouder'
After three years in the ‘Anna’ building, we moved to the 'Stadhouder', a multi-office space for creative companies. The 'Stadhouder' takes its name from its address:
Stadhouderslaan 9, The Hague, the Netherlands.

Five Spices opened its doors at the end of 2005 and steamed ahead to 2010. Its five year anniversary was festively celebrated in both Shanghai and The Hague. In Shanghai, the Consul General, Eric Verwaal, opened the festivities at which it became clear that both the Chinese and the Dutch love games and that they are also good at karaoke – at least some of them are! In The Hague, the Museon’s Maarten Okkersen interviewed the designers of the Five Spices Exchange’s five teams and presented them to the guests.
Five Spices looks back at five exciting years of a special creative exchange with China. We now welcome the next five years with great enthusiasm and motivation.

How do you stimulate collaboration between Shanghai and the Netherlands? Chinese designers and artists are hugely interested in what is happening in Europe. As a multi-disciplinary agency, Five Spices has a wide network of designers in both the Netherlands and in Shanghai, and it has brought these skilled professionals together in the Five Spices Exchange. As part of the ‘Five Years Five Spices’ anniversary, this international platform was established to foster effective international collaboration between designers.